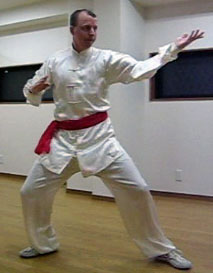 Baguazhang is one of the major internal Chinese Martial Art styles. The name translates to “Eight Trigram Palm”, referring to the trigrams of the ancient Chinese text the ‘Yijing’. Baguazhang is characterized by circular walking as a means to develop stability in motion and involves fast directional changes with both flowing and explosive power. Many of the internal aspects are similar to xingyiquan and taijiquan, however, in essence, they are distinct. Baguazhang contains a wide variety of techniques, including various strikes with the palm, fist, fingers, elbow, shoulder,  kicks, joint locks, throws, all of which are often combined with the characteristic evasive circular footwork.

As with the other Chinese internal styles, the movements of baguazhang employ the whole body in coordination. By using smooth coiling and uncoiling techniques and dynamic footwork, movements can be preformed rapidly to complete a straight forward attack or throw. The circular stepping pattern not only builds up centripetal force, allowing the practitioner to maneuver quickly around an opponent but it is also excellent for evasion when fighting multiple opponents, a foundation that early baguazhang was built on. 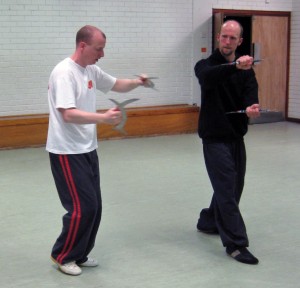 The White Orchid School teaches Cheng and Yin styles of baguazhang, each of which includes basics, circle walking, barehanded forms and techniques and weapons forms.