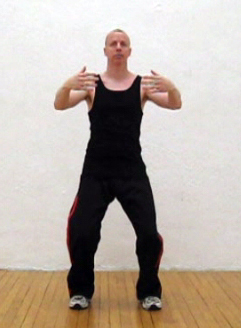 Qigong is the Romanized pinyin word for the Chinese characters Qi (氣) and Gong (功). It is also written as Chi Kung in Wade-Giles Romanization. In Mandarin Chinese the word qi most commonly refers to “breathing”, “air” or “gas” but it can also be used to describe “energy”. The word gong refers to “achievement” or “result”. Therefore the word combination “qigong” can be used to denote various systems or exercises which promote energy cultivation.

The origin of qigong is often attributed to Huang Di, also known as The Yellow Emperor, who reigned more than 4,500 years ago. He produced the medical text, The Yellow Emperor’s Inner Canon, which has been a fundamental doctrinal source for Chinese medicine for several thousand years. Archaeological evidence has also been discovered to give some clues to the origin of qigong practice. Much of that evidence suggests that early qigong was related to meditation and simple forms of exercise practiced by ancient sages. The Mawangdui Silk Texts which were discovered in 1973, date back to 168(BC) and show several daoyin (a precursor of qigong) exercises, many of which closely resemble the qigong forms practiced today. In Traditional Chinese Medicine theory the blood and qi flow together, so in any system of qigong that is practiced correctly, an increase in blood circulation can also be evident.

This is a series of specific and choreographed movements which are designed to facilitate the flow of qi or energy within the practitioner’s body. This type of qigong utilizes the movement in coordination with the breath and mental focus to achieve the desired control over the qi flow.

This is based on maintaining a specific posture or stance for a period of time. The amount of time can vary depending on the particular posture and on the ability level of the practitioner. Mental focus is required to achieve qi flow in static qigong and this system is therefore excellent for calming the mind.

From a Western medicine perspective, qigong lacks a scientific background and the application of knowledge is largely case study based. Therefore many Western medical practitioners have been reluctant to endorse qigong as a valid form of treatment. However, presently more and more doctors, hospitals and clinics are using Traditional Chinese Medicine methods, including qigong, in addition to conventional medicine and prescribed treatments. Preliminary studies suggest that qigong may be beneficial in the treatment of asthma and respiratory disease, hypertension, chronic fatigue syndrome, cancer and Parkinson’s disease. Although the inclusion of qigong therapy is proving to be a very positive step within health care, it must be stressed that qigong is not a substitute for prescribed medication and practitioners interested in the curative aspects should always consult their doctor before beginning any qigong regimen.

Martial qigong uses a combination of focus of the mind, breathing and sometimes movement to guide qi to the muscles, bones and connective tissue of the body. This creates flexible strength which can be applied in either offensive or defensive martial techniques. Qigong for martial arts is practiced in conjunction with a specific martial art and does not necessarily contain fighting techniques in itself.