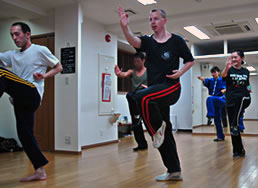 Kung Fu incorporates a number of fighting styles that have developed over the centuries in China. These styles are often classified according to common traits, such as physical exercise and movements involving animal mimicry, training methods inspired by Chinese philosophies, religions and legends and styles which focus on qi manipulation or on improving muscle and cardiovascular fitness or on both of these aspects.

White Orchid Kung Fu utilises all the above aspects and covers techniques ranging from blocking, punching, kicking and throwing to advanced qinna (grappling) techniques and form practice. Students work through the school syllabus which is divided into 5 grades. Initially the martial techniques are very similar to other styles but as the grade levels become higher, there is more emphasis in internal techniques and not only applying body mechanics but also focusing on the use of internal energy.

Lian Bu Quan is one of the hand forms of Chang Quan (Long Fist) style. It is one of the White Orchid Kung Fu intermediate forms and is characterized by long range hand and foot techniques and swift stepping from one technique to the next.