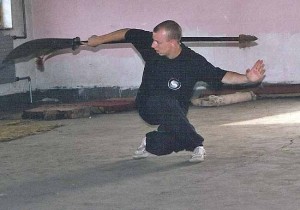 Gary has been interested in martial arts from a very young age and trained in karate and judo before joining the Chanquanshu School of Kung Fu in 1983. At that stage classes were not only a great way to burn off energy but also a way to continue the basics of his martial arts studies. He found that he enjoyed the aspects of Kung Fu more than the styles he had previously studied and as he got older Gary began to study more seriously and also began training in Taijiquan and Xingyiquan.

In 1992 he achieved the level of instructor and shortly after formed his own school while studying at university in Glasgow. During this time he also branched out studying the Japanese arts of Ninjutsu and Shorinji Kenpo. After graduating with a BSc in Anatomy, Physiology and Sports Science Gary worked for 2 years to raise the funds needed for a year of study in Beijing, China. Here he studied the Qigong system of Daoyin Yangsheng Gong gaining a Chinese National Diploma from the Beijing University of Physical Education. He also began studying Baguazhang and furthered his study of Taijiquan and Xingyiquan and was accepted into the lineage of the Bu Family of Shanxi Xingyiquan as a fifth generation instructor.

After completing his studies in China, Gary became a professional instructor teaching Kung Fu, Taijiquan, Xingyiquan and Qigong for health and martial benefits. He taught regular classes, workshops and seminars throughout the UK and in the US before taking a break from professional teaching and joining Her Majesty’s Royal Air Force. During his 6 year commission he was employed as a Military Police Officer and completed several operational tours. During this time he maintained his martial arts studies and taught many self defence, close quarter combat and arrest and restraint technique courses in addition to Kung Fu and Taijiquan.

On completion of his military career Gary moved to Tokyo, Japan for 4 years. While there he taught in international schools, which included teaching physical education and Kung Fu to children ranging in age from 3 – 12 years old. He also worked in a Tokyo Martial Arts Studio teaching Kung Fu, Taijiquan, Baguazhang and Xingyiquan, and trained in Aikido during this period. After leaving Japan Gary moved to the USA and established the White Orchid School of Kung Fu, teaching classes in Kung Fu, Taijiquan, Xingyiquan, Baguazhang and Daoyin Yangsheng Gong.